Hip, Groin and Thigh Pain – do you have a leg to stand on? 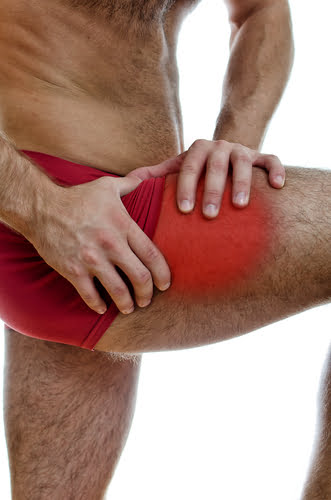 The hip and its surrounding muscles are the heavy load bearers of our lives, every time we get up, move and sit back down again they are taking the weight of the body and transferring it to a new position.  When we walk or run, they must cope with the full weight of our bodies while we are balanced on one leg. The hip joint and its surrounding muscles are working their hardest and have the most demands placed on it when we load them in this way (1). It is no surprise then that the hip is subject to a range of problems, most of which are specific to our age (2).  Muscle tears and hernias tend to be in the younger more sporty age groups, hip joint degeneration, such as seen in in osteoarthritis of the hip is mainly seen in people aged fifty or over (3).

The first task in attempting to get rid of pain in the hip is to first work out if the pain is indeed coming from the hip joint or its surrounding muscles.  There are several other parts of the body that can refer pain to the hip, most commonly the low back and the large sacroiliac joints at the base of the spine, but digestive and urinary problems can also produce pain in the hips (3).   A simple test is that if you have to limp due to pain and there is pain in your hip when you stand on one leg then you may have a problem with your hip.  If there is tingling or numbness around the hip and thigh the problem is more likely to be related to your back (3).  In this article we identify the most common causes of hip and thigh pain and the best ways to get rid of them.

Gluteus Medius Strains, Chronic Tendon Problems, and Trochanteric Bursitis – So much in a small space! 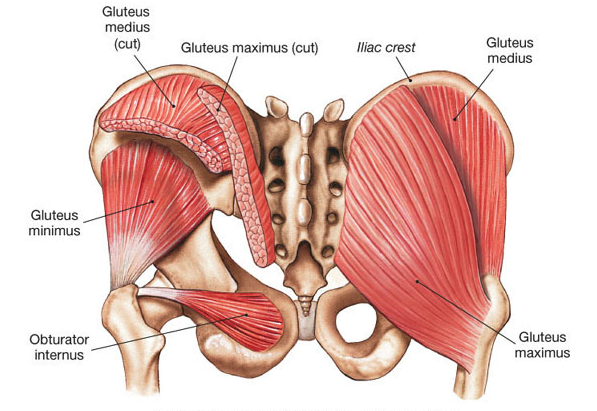 The gluteus medius is an extremely strong muscle that lies beneath the gluteus maximus (which gives you the shape of your buttocks), its main function is to provide stability to the body when standing on one leg (1), if it does not function properly then walking and especially running are problematic at best.  Because of its important function it can be vulnerable to injury.  Due to its location, an injury to the gluteus medius will be felt on the outside of the thigh and possibly down to the outside of the knee and lower leg (4).  In a younger population it can be due to overuse (increasing exercise too quickly) or trauma (stepping off a high step).  These types of injury tend to respond well to rest and stretching (5).

A more long term problem may develop over time by tiny but repeated tears to the tendon of the hip abductors (including the gluteus medius) causing damage to the tendon with a failure in the healing mechanism, this is called a tendinosis (3).   The repeated damage may cause inflammation in the muscles and tendons of the hip and also result in inflammation of a structure called the trochanteric bursa (6).  A bursa is a small fat pad that ensures smooth sliding of muscles over each other to reduce friction, however due to the nature of its job it exists in a very tightly packed space, this means it can easily be affected by changes in the surrounding structures (5).  The gluteal tendinosis and the trochanteric bursitis were previously seen as two separate conditions but after investigation they are now considered two stages of the same condition (7) and renamed ‘greater trochanteric pain syndrome’ (GTPS). 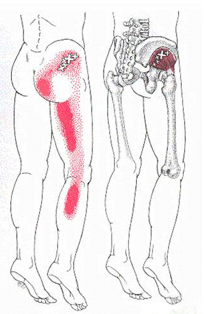 GTPS is the most common painful problem seen in the hip (3) and is seen more commonly in women, aged 40-60 who may also have osteoarthritis of the knee.  It is also very common in long distance runners (8).  It is usually described as being a deep ache around that outside of the thigh and bottom of the buttocks, it may be felt lower down towards the outside of the knee but rarely below the knee.  It can be aggravated by lying on the affected side, crossing the legs, standing for long periods and climbing stairs (9).

If you are unlucky enough to suffer from GTPS the best thing to do in the short term is to rest and avoid the things that make the pain worse (10).   The next thing to do is to get a diagnosis from a professional such as an osteopath so the correct treatment plan can be decided upon.  There is good evidence that several styles of treatment, including osteopathic techniques, that can be effective in the rehabilitation of GTPS, these include manual stretching of the hip and the prescription of stretches and strengthening of the hip muscles (10).

Another very common problem that occurs in hips is osteoarthritis.  The surface of the hip joint is covered by smooth hyaline cartilage, as the hip joint is a weight bearing joint eventually the cartilage becomes thin and the bone below is exposed causing friction, inflammation and pain. Due to the problem being one of degeneration it tends to occur in people aged over 50. The risks can be increased by faulty loading of the hip joint due to poor biomechanics (possibly the influence of surrounding joints), obesity and previous injuries such as fractures to the pelvis or leg bones (5).  80% of all hip osteoarthritis is secondary to such factors (3).

The pain that hip joints produce tends to be felt in the groin and is worse with movement and better with rest.  It may also feel stiff to start moving and then get better as you move.  An accurate diagnosis is made with a combination of physical examination of the hip, then more definitively by an x-ray (3). 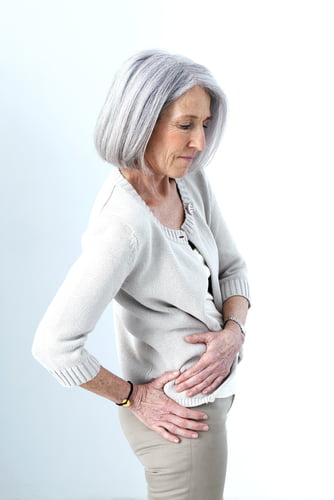 Due to the degenerative nature of the condition a cure is very unlikely, however several options exist that can eliminate the symptoms and keep the hip functioning well (5).  Conservative treatment based around stretching and massage of the hip and it’s surrounding muscles is effective alongside advice on appropriate exercise, nutrition and weight loss if necessary (11).  If these measures are not effective or the pain is very severe then steroid injections and surgery are recommended (5).  Most people with osteoarthritis of the hip continue to be active as long as they receive individualised care from an early stage.

The iliopsoas is a very strong muscle that lies deep in the front of the hip, travelling from the vertebrae in your low back, through the pelvis and attaching to the thigh bone.  It’s main role is to flex the hip (12).  Below the iliopsoas tendon, as it crosses the pubic bone lies a bursa, which if irritated can, alongside the tendon become inflamed (13).  The pain from this condition is again felt deep in the front of the groin.  However, unlike osteoarthritis it much more likely to be experienced in a younger population who are involved in sports such as martial arts, long distance running, dancing and gymnastics (5). One difference is that the pain may be felt up into the low back, and a ‘snapping’ sound may be felt while you are walking (10). 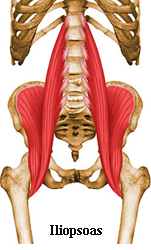 Conservative management such as osteopathic treatment can help resolve the problem.  Stretching of the iliopsoas and other muscles of the hip, coupled with mobilisation of the low back and effective exercise and activity advice should relieve the symptoms in under 8 weeks (13, 5).

A less common reason for pain in the groin is a ‘sports hernias’.  This is where there is a complex tear in the muscular elements of the hip and abdomen that produce raising of the hip and inward motion.  Because it is usually traumatic it is more commonly seen in a younger age group who are involved in sports that involve repetitive bending backwards with twisting at the same time, such as football, hockey, or martial arts.  It is most commonly experienced as a rapid onset of disabling low back pain with some lower abdomen and groin pain, the pain is mainly aggravated by trying to do a sit up or trying to twist the trunk while lying down (3).  Rehabilitation options are dependent on the severity of the tear to the muscles.  Usually rest and stopping any activity that may aggravate is the first port of call.  Conservative treatment involving core muscle and hip strengthening should be tried before any surgical option is attempted (2).  If surgery is indicate d the good news is that it tends to have a very high success rate (95%) (3). 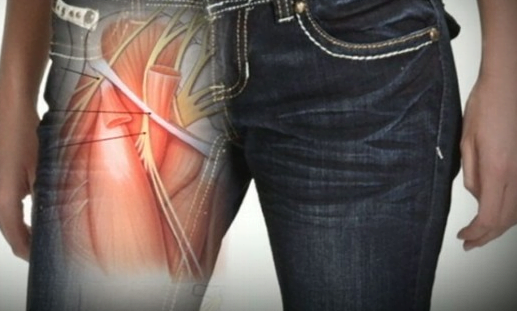 This is a less common condition that produces tingling, numbness, and pain on the front and outside of the thigh.  The pain is generated due to compression of the lateral femoral cutaneous nerve.  Usually this is due to mechanical stress on the nerve due to the changes seen in pregnancy, or with obesity, it can also be seen in people who wear heavy work belts such as policemen and builders (3).  Treatment is mainly focused around correction of the mechanical factors by manual therapy, combined with rest.  If the symptoms persist then surgery can be performed to decompress the nerve.  (2).

Keeping Your Hips in Good Shape 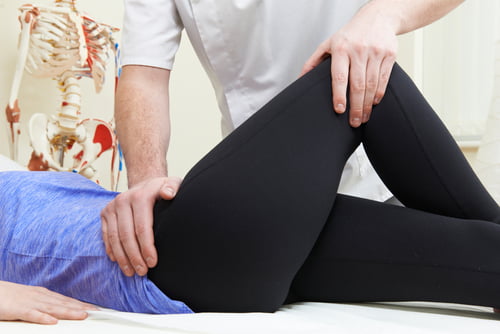 As we have seen in the examples above, many hip complaints can arise from improper mechanics such as a lack of mobility or a lack of strength.  The hip, pelvis and low back are very closely linked in terms of how they share the load of movement, a change or restriction in one area can have profound impact on the others (1).  In many instances hip complaints can be addressed by restoring normal movement to the low back, pelvis and hip musculature either through manual treatment from an osteopath or through prescriptive exercise (3).